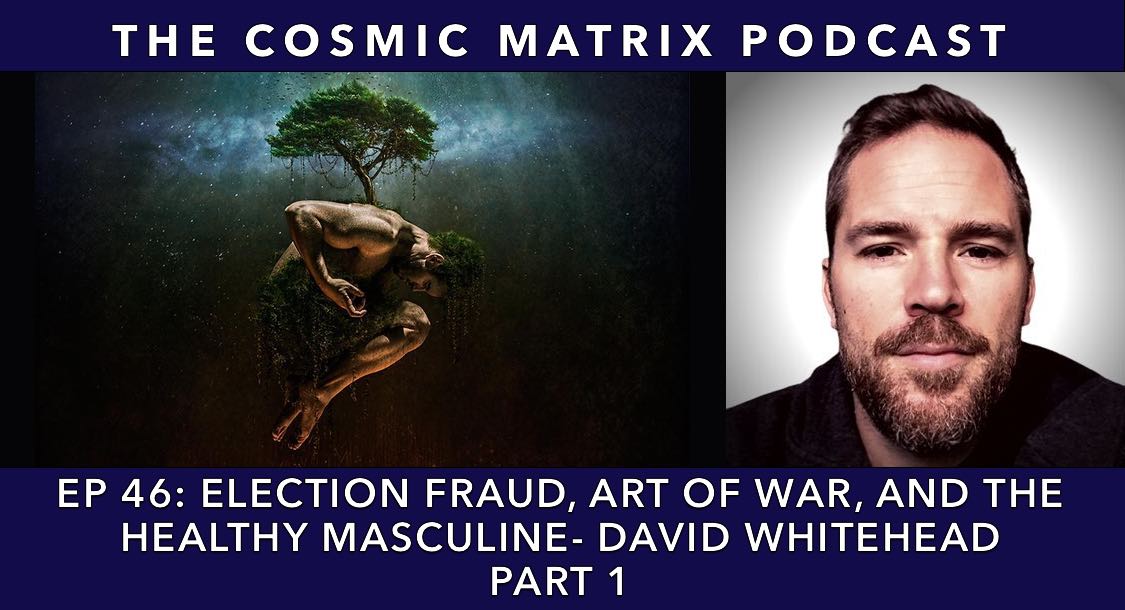 David Whitehead returns to the Cosmic Matrix podcast to speak with Bernhard Guenther.  David’s Facebook and Instagram accounts have recently been suspended and he’s been experiencing increased censorship on his youtube channel. He shares his views on the surfacing election fraud, the censorship by Big Tech, and the MSM, the geopolitical chess game of the CCP, and the globalists intending to destroy the US and Western Civilization.

David talks about Trump and how what’s happening politically is not the usual “two wings of the same bird” set-up like in the past, the Art of War strategy of Trump, the Patriots, and their sting operations to counteract the Deep State. Furthermore, he talks about the underlying oppressive ideology of collectivism/socialism, the archetypal role of Trump, TDS (Trump Derangement Syndrome), the masculine principle, and more.

In the second hour, David and Bernhard dive deeper into the psychological shadow projections of the Left, the importance of having a healthy ego, self-esteem/confidence, and how the pathological mob culture is aiming at destroying the healthy masculine principle. David shares his views on classical liberalism and conservatism relating to feminine and masculine principles, the blindspots of liberals, and how they are being taken advantage of by the globalists.

They talk about the danger of collectivism, socialism, neo-Marxism, and the dangling carrot of “free stuff” and “universal income”, i.e. “The Great Reset”. David talks about the importance to rise up, embody the warrior archetype and claim our sovereignty and individuality, taking full self-responsibility for ourselves and getting out of victim consciousness, and what we can do to help others awaken and counter-act the anti-divine forces, and much more.

David Whitehead is a full-time podcaster, martial artist, coach, entrepreneur, and public speaker with a lifetime of study and interest in esoteric information, philosophy, comparative religion and mythology, ancient and modern mysteries, the paranormal, and current geo-political events. The basis of his work is founded on a sincere pursuit of truth wherever it may lead, with an emphasis on facing and conquering fear and self-imposed limitation, which often get in the way of our physical, mental, and spiritual development.