The Matrix of Control – Beyond its 3D Manifestation 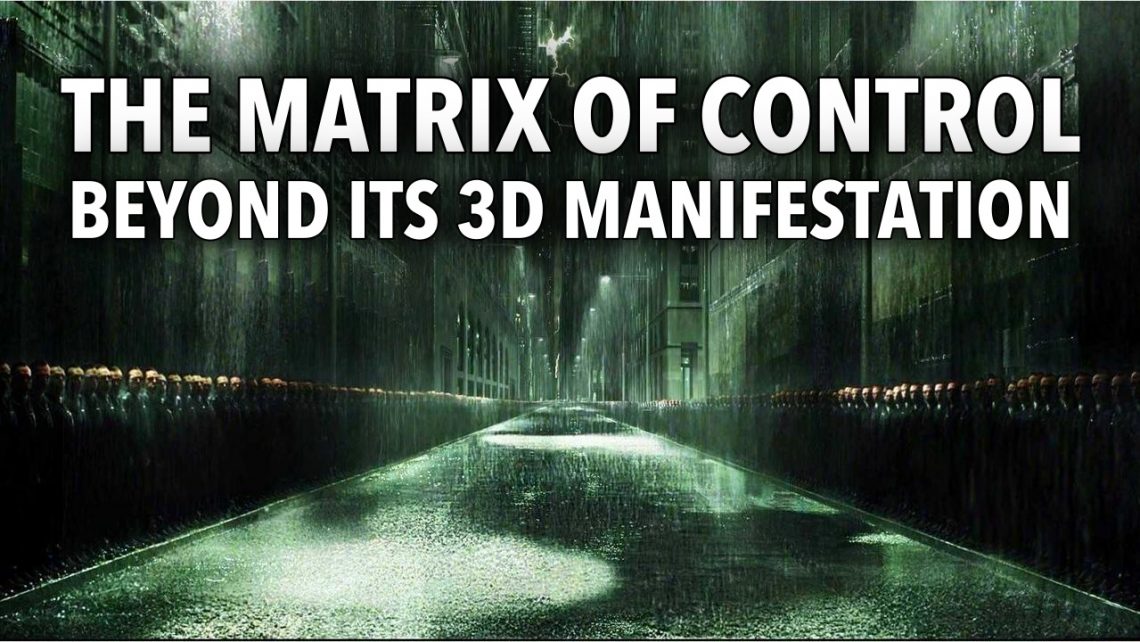 The Matrix of Control – Beyond its 3D Manifestation

This video gives an overview of the hyperdimensional matrix, occult forces, and what it takes to transcend the matrix on the path towards Awakening [12min]:

Many well-meaning activists and people are raising awareness about the issues our world and humanity are facing. That is definitely needed and necessary.

However, what is important to understand is that everything we see on a global 3D level — the ongoing wars, human rights atrocities, oppression, loss of freedom, surveillance, corporate greed, genetic modification, fluoride in the water, geo-engineering, chemtrails, pharmaceuticals, vaccination, religious and political dogma/systems, government, sexual pathologies, racism, mainstream media/entertainment mind control, Transhumanism/A.I., etc… — is the creation of (or heavily influenced) by occult forces that have been ruling over humanity for thousands of years, using their puppet humans to carry out their agenda in classic divide & conquer fashion on un-seen levels.

Their primary goal and agenda is and always has been to keep humanity locked in a frequency prison, feeding off of all the “emotional loosh” that is created through the suffering, polarization, drama, chaos, and fighting between humans; be it on a global level via wars or through interpersonal fighting in everyday life. Divide and conquer. It’s about keeping us in a perpetual state of fear, physical survival, and limited five-sensory perception and indulgence, disconnected from the deeper wisdom of our bodies and our divinity within – our own inner divine authority and emancipated selves.

Have you ever wondered why there are always wars, atrocities, and various control mechanisms thought out human history but nothing really changes? It just re-arranges with different faces and disguises. Like in a prison cell, the tapestry changes but the (invisible) prison is still there. People say “it’s just human nature and ego”. Have we ever truly questioned the term “human nature” and literally everything we have been told about humanity?

We are “GMOs”, genetically modified by hyperdimensional alien forces who are the real architects of the matrix. They see earth and humans as their property and farm, raising us like cattle to be fed upon. Society and modern official cul-ture as we know it is for the most part an alien-infused creation and not “human”. It is wetiko in action. These occult forces who have been given various names throughout the times and written about in ancient texts and esoteric teachings have also infused us with dogmatic religious beliefs and are behind the corrupted pop-spirituality of the New Age religion— an alien virus. It’s a pathology that has become normalized.

Simply focusing on the 3D manifestations (symptoms) of the matrix will never bring about true positive change, nor will it happen through any of the matrix institutions (such as the government). Attempting to do so feeds the NAA (Negative Alien Agenda)…literally. It doesn’t matter who you blame or focus on within the 3D level of the matrix: Government, Illuminati, Zionists, Jesuits, Bankers, or any political/corporate figure; they all are puppets themselves.

Understanding the Hyperdimensional Matrix Control System is key in this day and age for anyone who wants to awaken and have a better world. Sincere self-work and de-programming oneself from consensus reality is also part of it to essentially connect with our spiritual nature – your sovereign embodied true self, connected to the Divine in order to transcend the mutant Matrix and activate your original blueprint prior to the “fall” from your true state of being via genetic modification. This is the Great Work. It is not an easy path and work, for it entails facing our fears and questioning our deep-rooted socially/culturally conditioned beliefs and programs. Disillusionment is an inevitable part of the process, but the only way out is through.

Fighting governments and the psychopathic elite on a 3D level alone will never bring an end to wars and suffering for the “elite” themselves are just pawns and puppets of hyperdimensional negative forces that fully occupy them. Voting (and therefore giving consent to be ruled over) and believing in the religion of government is also an archonic mind control construct (including the major world religions). It is designed to keep people imprisoned out of their own “free will” (trap of agreement) and disconnected from their own inner spiritual authority as they give their power away and become authoritarian followers, always looking outside for “solutions” and saviors (politicians, spiritual/religious leaders, technology, or even aliens that are supposed “to defeat the cabal” – The New Age savior program).

Just focusing on ecological/environmental issues (GMOs, climate change, etc..) will also never bring about a “better world” in the long run for it is just fighting the symptoms. Again, everything we see as a “problem” to be “solved” on a 3D level is the manifestation of occult alien forces that have been ruling over humanity for eons. They act through the shadows and work through us, hidden behind a veil outside our five-sensory perception. It is in their interest to distract us from what is really going on in order to keep us imprisoned in a frequency prison – locked in 3D physical survival mode and feeding off of our soul essence.

Ignorance is not bliss, nor does it serve as protection. All of us are influenced by the hyperdimensional occult forces to varying degrees. People who don’t understand how the (unseen) manipulation/control operates – not only in the world at large but through their own minds – can be used as unconscious “matrix agents“, played like pawns on a grand chessboard without their awareness whatsoever.

That’s really what it comes down to in a nutshell, regardless of what people and activists focus on externally on a 3D level. Don’t get distracted by the shadows on the wall. I’m not implying to ignore the 3D issues of our world but seeing them in the context of a much larger picture.

The key in it all, in order to transcend the matrix, is not only knowledge of what the matrix actually is beyond its 3D manifestation but most importantly sincere esoteric self-work, shadow work, embodiment, and emotional intelligence in order to anchor the higher frequency of pure and true love and joy, connected to our wholeness within and the wholeness of nature. Love is Light is Knowledge and the gateway to receive Gnosis, higher Knowledge that cannot be perceived via the five senses or our petty little minds. This is the process of “Ascension” and Awakening during the Time of Transition we’re in now. Many are called, few chose to answer the call.

[For more information/references about the topics addressed in this article, please click on the hyperlinks embedded in the article.]

– Transcending the Matrix – Occult Forces and the Importance of Esoteric Self-Work (32min):

– The Matrix Control System & The Path Towards Awakening (1hr 27min):